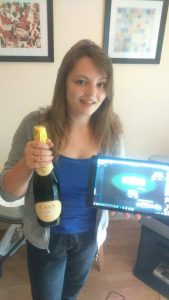 Today was a funny old day. The hottest September day for many years was forecast, but then as it transpired, only the South East of England were lucky enough to be gifted this, while here in Cardiff we suffered thunderstorms which meant I was sent home early from my part-time canvassing job.

Due to the fact that some maintenance was due be undertaken at the house where my ex-girlfriend, Christina, lives (she is now more of a close friend), she took the opportunity to come to mine to continue her poker playing “job” away from the disruption of workers banging around the place.

The term used for online poker players who tend to play a lot is “grinding” and after a quick exchange of texts “be nice to have someone to grind with *that is not an inuendo, lol” and “yeah we cld grind for a bit and I mean that in the cleanest sense”, it was agreed that she’d be round with a couple of Gregg’s pasties for a quick grind.

Cris arrived and we set to work. However then the utterly bizarre took over and suddenly Christina found herself in a spin-and-go tournament worth around $1400!! The principle of spin-and-gos is that there are three players competing for the prize pool. Usually this is just for double the buy-in (for $7 it will most commonly be for $14) meaning that extra money goes into a pot for special jackpot games. Christina just so happened to get into a huge jackpot game in just the third tournament she’d registered in, and bizarrely at my place (the residence of her “coach”).

I finished the short game I was involved in, Cris quickly neglected the game she was registered into at the same time as the jackpot game so she could concentrate on the main prize, while I paced about the flat anxiously.

All I could hear were screams of delight as she kept getting superior hands, regularly flopping two pair (always a bonus), and basically making it sound like a breeze, despite nerves.

The opponent she ended up heads-up against seemed to be playing as if this was just any regular game making some bad bluffs which Cris was able to read easily. She dominated the game and finally she once again had two pair which held up against her opponent, she’d won the game and around $1400 was landed into her account!

How had this happened and why I was left to wonder? What should we do now with celebratory sex out of the question?! Well, we did allow ourselves a bottle of Cava, marching triumphantly to the nearest Tesco’s and sharing the story with the attendant at the store.

I suggested a shopping spree, on me for the time being (ie. until the money appeared in Cris’s regular bank account) but she wasn’t really up for that. There are a number of things on Christina’s wish-list of things to pay for in the event of coming into some money, among these being paying for the deeds to a little property she almost owns in Bulgaria or buying a new PC, but for the time being we concentrated on the mundane plans we’d each already made for the rest of the day.

I assisted Cris with an email she needed to send and then she left, as the rain still fell, to run an errand (she didn’t even want a lift), while I went off to pick up some CCFC tickets, get some photocopying done and get some more things from Tesco’s. The way money can affect people!

There were a couple of odd factors to throw into the situation, and these included how I’d first decided that the album we should listen to while grinding should be “A Grand Don’t Come For Free” by The Streets. A grand didn’t come for free, but it certainly came pretty easily! Just as odd was that earlier in the day, Cris had been stopped in the street by someone suggesting she should get a flight to Cambodia to go on a TEFL course which also would cost a grand, leaving Cris to wonder if maybe that was fate decreeing how she should spend her newly acquired dough.

Had the powers-that-be at pokerstars decreed that Christina should win this large sum at my place on seeing she was using my ISP address, perhaps willing us to get back together? It is strange when a relationship has finished (Cris now has a new partner) but you’re still friends. Was it God or fate?  Just pure chance was the most probable explanation of course.

Well, like I say, we went our separate ways. I lent Crissy some cash so she wouldn’t have to be a pauper until the money hit her account, and she promised me a meal out when it had done. I drove off heading for the Cardiff City stadium, laughing occasionally as I did so. There’s one thing being in the company of this crazy girl does for me and that is guarantee a smile and some laughs.