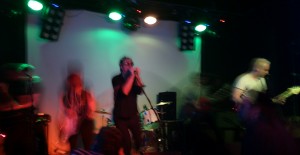 The Blue Aeroplanes are a band that have never quite taken off, as it were. Are they indie, are they rock? No-one has ever quite been sure. John Peel would not give them a session because he thought they were too rocky, yet Steve Lamacq, originally Radio 1’s main purveyor of Brit Pop championed the band, at one time saying that “Jacket Hangs”, the band’s most successful single, had the best intro to a song ever.

This song was lifted from their most well known album from the early 90s, “Swagger” (a very contemporary sounding title, you might think). According to the band’s website, Michael Stipe played this record relentlessly, and certainly, REM is the band Blue Aeroplanes are most akin to, with a similar sound, and in dark shades and classy suit, there is also something Stipean about singer Gerard Langley.

Like REM, the band has also always set out its stall as an “art” band, and again, I think people have perhaps been troubled by not knowing exactly what that is. Blur, you could say, were kind of arty, but obviously also far more poppy and accessible – The Blue Aeroplanes come across as a little more serious, and so perhaps, there is a greater effort involved in getting into them.

So in spite of a smallish crowd – I’m sure their gig a couple of days before in Bristol, the band’s home town would have been far better attended – the band launch enthusiastically into a lively set of singles and new stuff. You can hear how the band evolved, from the fairly jangly “Action Painting”, which was their debut single and tonight’s opener, through to their REM period – along with the “Swagger” era songs, there are many others, including “Tolerance”, featuring a similar riff to REM’s “Stand”, though in fact “Tolerance” came first, in 1987. These songs still have jangle of course, but perhaps a slightly richer, firmer guitar sound. But then, in the middle of the set is the gorgeous “Fun”, originally released in 1992, with Teenage Fanclub-esque surfiness.

I did think they may have played their cover of Paul Simon’s “Boy In the Bubble”, perhaps in honour of Nelson Mandela, but no, this opportunity is missed. A truly warm buzz is felt in the room when the band do eventually launch into “Jacket Hangs”, and arms all around the room begin swaying, as the song says, like helicopter  blades. Disappointingly, we are not led by dancer, Wojtek Dmochowski – another element that has always marked the band out – who is absent from the stage, although I thought I did spot him amongst the audience, or this may have been a keen fan.

The six strong line-up tonight is a mix of old and new, young and not so young. It’s a good blend though, and none of them look like they’re just making up the numbers. On the right is new guitarist Bec Jevons, looking as composed as the older statesmen; on the left, Mike Youé, a guitarist sporting tight striped trousers, the likes of which have not been seen since a certain reviewer wore a pair just like them at a Morrissey gig circa 1991 (along with brown t-shirt and hideous purple cardi). Central in stately black, Gerard looks the part; only the occasional flash of his striped boxers made at least me chuckle.

A band with charisma that seemed to be genuinely enjoying themselves – Gerard looked genuinely pleased that the new material went down well. Despite the crowd being on the sparse side, people responded very well – one young lady at the front having a right old wig-out – and perhaps never more than to “Breaking In My Heart”, which I think, with an almost Status Quosian guitar part, is most definitely rock!

Be they rock or be they indie, for me the Blue Aeroplanes have a lot more about them than many of today’s tiresome crop of guitar acts. And then, there are some bands that go on for so long, and really, many of them you think should have called it a day long before. For me though, The Blue Aeroplanes still sound remarkably fresh. Instead of sounding like a band that should have given up yonks ago, amazingly enough, they sound like a band still on the verge of a major breakthrough! Everybody – there’s this great new band The Blue Aeroplanes – you should get along to see them!

This review was first published on louderthanwar.com