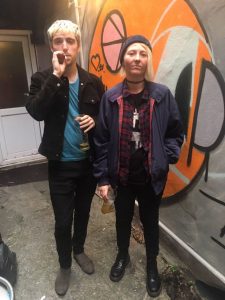 The inscription on the record of the debut EP by Rainbow Maniac reads “This record should be played loud”. When I met up with two members of the band at the Andrew Buchan bar in Cardiff, the emphasis definitely seemed to be, the louder, or more to the point, the rowdier the better. The band definitely like their gigs to be rowdy.

Think a riot of colour. That is Rainbow Maniac. The cover of the debut single could have depicted a baby covered in paint splatters but instead, they went for the more simple image of a bright pink cigarette lighter (bought from where other than Rainbow Bargains!), and this has now become part of the Rainbow Maniac trademark. Other bands go for the standard black. To stand out, Rainbow Maniac went for hot pink.

And image is important for the band. Conor comes on stage in dungarees with a shock of bleached blonde hair. Bassist, Laura also has bleached hair. They stand out from the crowd in a rowdy kind of way. “We’re trying to make our look a bit more prominent so it’s easily digestible. There’s so much shit in music that’s nothing to do with the music so it’s hard to get anywhere with great songs alone. So you’ve got to make it as easy as possible for people to understand what you’re about. So yeah, the dungarees go a long way!”

One of the band’s most memorable gigs was when they played The Moon club in Cardiff. The letters ‘RM’ were plastered on the walls. “It was the day of the Champions League final. People were coming in thinking RM stood for Real Madrid so we had a whole load of Spanish guys coming in to witness the rock’n’roll!” They are fresh from their appearance at the Swn festival which was very early in the day so as Conor says “our fans weren’t as drunk as they usually are, so it was a bit of a challenge, but I think we won them over.”

They also did a gig for the Grenfell Tower victims at Gwdihw featuring themselves, Buzzard and Boy Azooga, the classic trio as Laura says, and that went really well too. This one was one of the most memorable in the rowdy stakes.

Although they consider themselves as being part of the Cardiff scene along with bands like Buzzard and Tibet, they are keen not to be pigeonholed as a Cardiff band, or a Valleys band (they are originally from Bridgend) in their quest to be known on a more wide-scale basis.

At their gig at Swn, Conor made me laugh by introducing a few songs as “This is the best song by any band”. For me, the Arctic Monkeys have not released a song as good as ‘I Bet You Look Good on the Dancefloor’, and I wondered if the band should worry that they would be unable to replicate the genius of ‘Going Out on My Own’, but they’re certain that they have ample songs lined up that will even surpass this effort, namely ‘Tell Me Off’, ‘All Inclusive Trip to the Sunset’ and ‘Would it be Strange?’, all of which are a part of the current set-list. “For now the first group of singles and the second lot and maybe even the third lot of singles are taken care of. We’ll worry about our third album when that comes about,” says Conor. As Laura puts it, “We’ve definitely got a lot in the bag so if people think that (the debut single) is the highest standard then they’ve got another thing coming.”

Conor explains his songwriting process. “I usually do nothing for like two months and then I feel shit about myself, that I’m not as good as writing songs as The Beatles. Then I’ll have like a day where I write another two or three really good songs and feel really good about myself. Then I’ll take another two months off. I’ve concentrated less on writing lyrics lately as I’ve been trying to write pop bangers like The Beatles. When I’ve got more to say I might go back to writing more poetically. When I first started I’d write really long songs but now I’m trying to write words that help the song along.”

I ask the band where they’d recommend to go out on their own in Cardiff. Conor suggests the Blue Honey cafe. He says he rarely has a good time when he goes out. He’s always complaining that it’s too loud. “I’m a very old man deep down”. But the band like Blue Honey because it’s got a karaoke night where Conor once sang ‘LA Woman’ by The Doors. This went well as it was shortly after a gig of theirs and he felt like he was in Conor Latcham of Rainbow Maniac mode but he’s since tried karaoke singing the same song and it went “horrendously badly. I was singing the song to a room of people sitting down just scowling at me; there was no audience participation.”

Again, with the lyrics to ‘Going Out on My Own’ in mind, I ask if the band think it’s best to be stoned, sober or drunk. “It’s best to be drunk obviously all the time but it’s trying to find the balance. But I can’t really get stoned. Whatever the good feelings are from getting stoned, they don’t really come for me. Drugs just make me feel intensely worried.” Laura says she’s not really into it either. As Laura says, “It’s like when you’re on drugs it kind of brings out everything that you’ve suppressed in the back of your mind that’s worrying you so it’s never a good time really.” Conor says, “I wouldn’t want to get labelled as a square band. I’m a proud advocate of drugs! But there’s a time and a place.”

According to the band’s website, fans are already starting to have the band’s trademark black rainbow tattooed on their bodies. Both manager Ray and Laura also have the tattoo. Conor joked about how the logo is reminiscent of the mark made by a car rear window wiper and Laura suggests they should have specially made rear window stickers.

In the band’s quest for fame, I ask them if it’s more important to make money or for people to hear their music. “It would be the making of music, but I’m not gonna do it for free.” Conor says, “I’d rather have everyone in the world know who Rainbow Maniac is and have no money than having all the money in the world and no-one know us.”

I ask what’s the most rock’n’roll thing that’s ever happened to them or if they’ve ever got into a band fight or something like that. Conor says this has yet to happen and besides, with Laura in the band they’d have to be careful. However, Laura was quick to correct him on this and said she would more than hold her own. If they got into a fight with The Himalayas, Gavin could take on the drummer who’s pretty big, but as Laura reminds us, “I’m a postie, I carry 5 kilograms on my back every day so I’m pretty fit – I could take them!” Conor considers which band he’d most like to get into a fight with and opts for a two-piece like Simon and Garfunkel!

We shared a large bag of chips which Laura popped out for and chatted more about rock’n’roll. As we spoke, manager Ray was receiving messages about more up and coming gigs. They were offered a gig at Castell Coch which unfortunately the band weren’t able to do due to other commitments. But Rainbow Maniac at Castell Coch sounds like it would have been awesome. Especially if a rainbow formed over the castle! Rainbow Maniac – coming to a castle near you, soon. It’s sure to be a rowdy night.

Tags: going out on my own, justin beiber, louderthanwar, rainbow maniac, swn festival