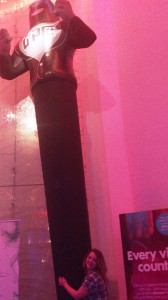 You’ve heard of the expression “taking everything but the kitchen sink”, well, we came close to even taking that with us! Along with 5 different baseball caps, various shirts, a pack of cards (obviously), along with poker table-top, no end of charging cables with sockets, and all kinds of other odds and ends, Christina came up with the bright idea of bringing the microwave! The thought process behind this was that we could buy supermarket microwave meals, and heat them up in our hotel room, rather than fork out on restaurant food or room service. It sounded crazy, but in fact, at the same time, it sounded like a good idea, so it was popped into the boot of the car, and we were off.

The Goliath poker tournament, run by Grosvenor casinos, and held at the Ricoh Arena in Coventry, is the biggest poker tournament in the UK in terms of number of entries. The whole thing stretches over a total of 8 days. The buy-in is £100, plus £20 registration fee. That’s a lot for any small time players, but not too much for all keen regulars at any of the Grosvenor casinos around the country, and with a guaranteed prizepool of £250,000, it’s one that a lot of people like to have a go at. There are plenty of satellite tournaments where you can win tickets for a lot less than £100, and Christina and me had spent the previous few weeks trying to do just that. I’d won a ticket via a freeroll (which was also a £5 rebuy) in Swansea, not having to rebuy once, so I had one ticket for nothing, but it would be useful to have a back-up in case of needing to re-enter. Well, we probably spent about £100 between us trying to get a second ticket, and failed; I spent a frustrating week trying to download the Grosvenor poker software, without success. But no bother, we had enough funds to buy-in a couple of times each if necessary.

Patrick, winner of Swansea Grosvenor’s recent league final, and collector of 8 (or was it 9?) Goliath tickets had tipped me off weeks before that Cardiff were playing Coventry in the same week as the tournament at the Ricoh (for the first time in years, I’d barely glanced at Cardiff’s forthcoming fixture list), so making this game was a must. Even though, as Coventry no longer play in Coventry, this meant a 30 mile diversion to their current home of Northampton. As chance would have it, this is also where Christina’s nan lives, so the plan was to stop off here on the way. 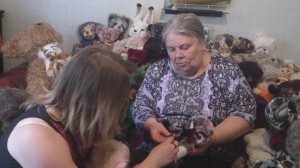 Christina’s nan has a lovely, well kept home, with an extraordinary collection of bears, elephants, dragons, and other ornaments. Her collection of Charlie Bears currently stands at over 80, I believe – she’s another one with a bit of a Shopping Channel addiction – but the main room that houses the bears looks fantastic. We engaged in some small talk while we waited for a large variety pizza to be delivered – we learned that the neighbour’s dog, for example, had caused some problems, necessitating in the installation of a 9’ fence!

The pizza really was delicious, and was washed down with a cracking cup of coffee, but we were already running late to miss the start of the match. Fortunately, the Sixfields Stadium was but a short drive away, and within minutes, we had our tickets, and despite the gates, with the kick-off already underway, being locked, a knock on a couple of doors, and we were in, with Cardiff already a goal up, and the 350-strong Cardiff support in good voice.

I think I’d missed something when I tried a chant of “Is that all you take away?” directed at the Northampton-resident Coventry fans – it would appear the order of the day was not to mock, but unite in support at their misfortune vis a vis “modern football”, apparently akin to Cardiff’s situation (while Coventry don’t even play in Coventry, we, the Bluebirds, don’t even play in blue). Still, I’m sure in the old days Coventry’s situation would have been fair game for mickey taking, rather than this thing of showing mutual support. On 35 minutes, fans on both sides were being encouraged to hold up signs of mutual bad-situationism. For me, this is just an atmosphere killer. Chants of “Can you hear Northampton sing?” would work far better, I think, or at worst, “We’ve got a bigger grievance against Modern Football than you!” or something along those lines.

Cardiff won the game 2-1. Not too bad a game. The Coventry (or was it Northampton?) keeper, Burge, came in for a fair bit of stick, but not too much else untoward. My phone’s battery had died, so sadly, no photo of Christina at her first ever Cardiff City game. She has the ticket and memories, of course, though.

A quick stop at the Ricoh to see how things were getting on. We had a quick look in the main room. There were a number of masseurs on hand, as it were, which Christina has an objection to. As she sees it, this gives male players an unfair advantage, and she finds their presence a little offensive. She asked one of the Grosvenor staff why there are no male masseurs for female players, and was met by the slightly predictable response that the gender of the masseurs is not the issue, when quite clearly it is – I don’t think a team of male masseurs would be nearly as popular. Well, the guy said he would raise the issue with his manager, but in the meantime, if Christina needed her back rubbed during the tournament, it was probably going to have to be me doing it! She paid her entry into the tournament, and we headed to our hotel, which we hadn’t even checked into yet.