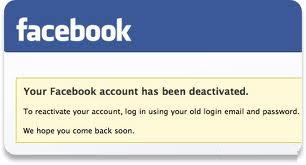 Following a row over a photo which a friend wanted me to take down, I decided, sod it, to be honest, I might as well just leave facebook. It might well turn out to be the best thing I’ve done for a long time.

The deactivation process is pretty quick. A request for your password, a prompt asking why you would like to leave, a “captcha” word to fill out, and before you know it, Bob’s your uncle, you’re no longer on facebook. Just before this however, there is one slightly surreal moment, perhaps akin to the experience of “life flashing before your eyes” as we’re told by some to expect to go through before death. Pictures of 5 people that facebook expects you might “miss” the most appear in an effort to get you to reconsider (maybe it’s more like the last chat you might have with someone before taking the plunge into a river a few hundred feet below you). They seem to be assuming that these are people you’re never likely to see again in real life. I have a strong feeling that these featured people are likely to be people who have “checked out” your profile on a regular basis. This is something facebook users often seem to wish to know, as various spam apps regularly appear on the site encouraging you to try to discover this information. I suppose it is slightly comforting to know that someone you “didn’t know really cared” had been looking you up after all (tip for anyone who plans to remain on facebook and would like to find out this information – just try out the deactivation process and click to say that after all, you would not like to commit facebook suicide at this point).

I had actually committed facebook suicide once before. After a particularly depressing day, if I recall, I decided I would leave the site. Around three years ago though, I’m pretty sure that if you just clicked to deactivate, all your details would remain online for people to see. Now, it would appear that, after quick checks on 2 other facebook accounts I have (and which I longer use), as soon as you’ve deactivated your account, everything you’ve ever posted on the site simply “disappears”! I assume this is to get around difficulties facebook might have had with people wanting to leave without leaving any “facebook footprints” as it were, and possibly also as a way of discouraging deactivation (they may think the concept of every single thing you’ve ever posted being no longer visible might be too much to bear for many people who have been on the site a long time and have made the slightly whimsical decision to quit).

Back when I’d attempted “suicide”, when, like I say, I’m not sure if every one of my details was deleted from the site, for it to appear at least in some ways genuine, I also deleted all my friends (actually all bar one – one particular female friend who I decided I couldn’t quite bear to delete, especially as I wasn’t totally sure she would re-add me if I requested it), along with all the photos I’d posted up! Within a couple of days, I decided to go back on the site though, and spent a few days re-adding everybody that I could remember I’d been friends with. It may have been a bit of a fake attempt at death, but it was good to start afresh in a way.

It remains to be seen, just one day after the deactivation, whether I will stick at it. Everyone knows how easy it is to reactivate after all – you just type in your email and password as you always would have done, Bob becomes your uncle for a second time, and you’re back on facebook, and presumably all those things which magically disappeared will magically reappear. I would like to hope I will stick at it however. Some people might think it a bit diva-ish, and that I should just eat a Snickers, get back to reality and re-join. There was a time when facebook was still in its infancy (probably before it started the live feed, ie. when posts were far more infrequent) that talk of leaving facebook was commonplace. Now, it’s assumed that remaining on facebook is a good thing, and people who aren’t on it are regarded as a bit odd.

Although I can’t deny I’ve mostly enjoyed using the site, right from when I was first invited to join by a friend I worked with at Glamorgan Cricket who was using facebook to post up photos while abroad back in 2007 – a particularly good way of utilising the site, it seemed at the time – and I’m sure I will miss it at times, I hope I can keep off it, as I’m pretty sure it will be great for me in terms of getting on with other things. Finding out the minutiae of people’s personal lives and sharing your own with others is a slightly unnerving thing to begin with and takes some getting used to, but once you’ve got over this, facebook can be great fun, but God, what a time-waster! The more friends you have, the more time you will waste, with more things to read, and the greater likelihood that if you post things up, you’ll have endless comments to trawl through and reply to.

Facebook has become a very effective tool for marketing, promoting and publicity. When I was running a magazine, I found it a good way of keeping people informed about what I was up to. But now I no longer have the magazine, there’s nothing I’m really promoting, so that’s another reason why staying on facebook is not essential for me. Yes, I might miss a few events that other people would like me to know about, but to be honest, towards the end, I found it pretty tiring having to hear about every single event that was going on anyway. I don’t go out as much as I used to, so now I will probably just be even more selective about when and where I go out.

I definitely need to get a job, and leaving facebook should help with that. Facebook, and the internet in general, has in many ways been a lifesaver for the unemployed, and I’m sure many jobseekers wonder how on earth they coped with the boredom when there was only daytime tv before. However, facebook can almost fool you into thinking you have a job of sorts, it becomes such a priority in life. Being on facebook does not pay however, and in fact, I actually have a proposal to the government – perhaps they should even offer jobseekers a bonus (perhaps £10 a week) to leave the site – it would definitely give people the incentive to spend more time looking for work.

So if I do stay off facebook, which like I say I definitely hope to, I’m looking forward to having more of a proper life. Perhaps I’ll even get more exercise. Or maybe I’ll just switch to fiskbook instead…