Christina Vs The Ricoh Arena

Today was going to be all about Christina playing in a student ladies’ event, which started at 5, but before then, we thought we’d go into town to have a couple of hours to distract ourselves from poker for once.

We had a good all-day breakfast, Christina did a spot of charity shop shopping, then we just had time to look around Coventry’s quite impressive transport museum (Coventry was after all once the centre of the British car industry).

We made it back to the casino just in time, but typically, as you might imagine for a ladies’ tournament, they decided to delay the start as not all of the entrants were there! As we had another hour to kill, we nipped to a nearby Tesco and got a couple of things to eat and drink.

There were to be 12 entries to the ladies’ event, so it was initially spread over 2 tables. I had the small matter of getting my Pixies review in to Guy at Louderthanwar, so I did that on my phone, then settled down to watch this event.

In fact, there was also football, in the shape of Arsenal v Wigan’s FA Cup tie, on TV, and I did think of taking a picture of me, with a beer, with the ladies’ tournament going on behind me, while the football was on, and posting it up with the tag, “This is the life!” or something similar, but I feared I might get ejected for being sexist.

The women in this tournament had definitely made more of an effort in terms of their appearance than most men – most were smartly dressed, whereas most men can look quite scruffy.

At one stage, it was decided that rebuys should be allowed, and there were 2 of these, it turned out, before the first break. Not long after the break, and after the end of this rebuy period, there were 2 exits, and it was down to the final table of 10, with Chrissy sitting in a healthy second or third place.

Following another break, Christina began to take control. I really don’t think it’s being sexist to say that most women at this sort of level could be expected to play in a particular way. You can expect a lot of flat calling pre-flop; most women at this level will not be betting much unless they have a made hand; there will not be much bluffing, therefore you can expect any big bets or raises, particularly re-raises, to mean that the player has a strong hand.

Christina plays nothing like a typical woman. Having played a lot of heads-up games online, she likes to get pretty active, with a lot of betting. She is also a good reader of the game, and makes some impressive calls.

Well anyway, Chrissy was just raising pot after pot, and therefore taking down a lot of the smaller pots. She had a huge wall of 50 chips, which were used mainly as part of the antes, and this demonstrated just how many hands she was winning.

I watched a lot of this tournament, as I find Chrissy an entertaining player to watch, apart from anything else, but I did also spend about half an hour playing a cash table. I was down about £25, having not picked up any hands, then donked my final £15 in with A/5 suited v 8/8, and luckily hit a flush. A couple of hands later, I donked it in again with A/Q, and the hand held up yet again, and I left the table with about a £10 profit, keen to get back and see how Chrissy was getting on.

I also was considering entering the casino’s regular Saturday night tournament. I had my name on the list for it anyway. As it turned out, it got to the break, and the end of the rebuy period. I was then given an entry, and was more-or-less obliged to get the add-on at this stage as well, so was in for £40. I ummed and erred about it though, and thought that as Christina’s tournament would not last that much longer, it might be better if I didn’t play in this tournament after all, and the card room manager very kindly allowed me to withdraw.

So now it was just down to me to concentrate on Chrissy’s event. I had a slight panic as I thought I’d lost Dave for a moment (Dave, short for Dave Gorman, the name of my tablet) which had been inside my jacket. Fortunately, it was handed in at the cash table I’d been playing on, and I gratefully bought the guy who’d handed it in a pint. 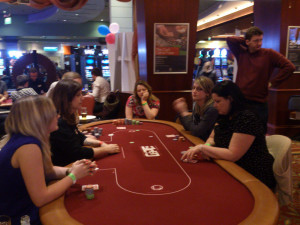 So it was down to 5 or 6 on Chrissy’s table. Chris had eliminated one of only 2 players at this table who I thought might be potential opposition, an older American player who had travelled quite far. She then came up against someone who had far fewer chips then her, who put in a big bet on a board that included two 10s, and a flush draw. Chris somehow figured that an all-in bet here with nothing more than king high might be enough to get this lady to lay it down, but sadly, she did not, and tabled the flush. Some watching spectators were a bit amazed that a female player might have the audacity to try a bluff on such a board. Chris herself, I know, was a bit angry with herself. She still had a reasonable stack, but had drifted from a comfortable 1st to third, with two shortish stacks behind her.

She went on tilt for a bit, and went all-in pre-flop in about 4 hands out of 5, and didn’t get a single caller once, so that helped get her stack up again. There then followed an absolutely insane hand. One of the short stacks (though not that short) was all-in, and both Chris and the second-placed player had called. The flop came 7/Q/J, and from somewhere, I’ve no idea where, Chris found the nerve to shove all-in, when she still had a good number of chips, and about the same as the other girl still in play. After some time, the girl called, and showed A/9 (ace high, in other words). Chrissy turned over 7/10, so had the bottom pair on the flop! I could not believe this play of hers. Truly phenomenal, and a lot of onlookers were pretty amazed at this stage. Incredibly, the short stack tabled 5/7. Can’t really remember how she’d even been in the hand. So obviously, still a big sweat for Chrissy with a number of cards to avoid, but her pair held up, and it was now down to 3, with her having a big lead.

At this point, the trophy was brought out. Given that there were only 12 runners, the cash prizes were not going to be considerable, but a trophy of course is always something nice to win and something to be proud of. For me, Christina had been by far the outstanding player at the table. If the trophy had been awarded to the player who had played the best, and won the most hands, she would have won it easily. Even though she had been very keen to win the trophy though, she was concentrating so much on her cards that she didn’t even notice that they’d brought out the trophy! Finally, she saw it, and walked right up to have a look, grinning at the thought of winning the attractive glass prize.

The shortest stack was out, and it was down to the last 2. Chrissy would be up against the girl who not too long before she had gifted a considerable number of chips with that woeful bluff with king high. I actually even started to think that Christina had tactically ensured that this would happen, fancying herself against this girl heads-up more than some of the others! Of course, there’s surely no way she could have tried to engineer this, but she had been so dominant throughout, I wouldn’t have put anything past her!

Chrissy called a break. We had a cigarette, then I went to the bar to buy her a cocktail. It took an age for me to be served, which was agonising, as I had no idea how Chrissy was getting on back in the tournament she’d rejoined. Finally, I got back to her table, to find her a few chips down. There were a couple of exchanges. Chrissy won a few to make things more or less level.

Then Chrissy found herself being raised. She must have had something because she put in a re-raise. Her opponent then re-raised all-in. Little did I know it, but this was one of the easiest calls Chrissy would make all night, as it turned out she had aces!

A few people crowded round. There were not as many spectators as earlier, as friends of the other ladies in the tournament had drifted off. It was a shame, because this was a great tournament to watch. It was a shame that Chrissy herself did not pick up more supporters, as she’d played so well. I think some of them were a little jealous of her perhaps – who does this girl think she is, they might have thought, playing like a professional, with her coach (me!) watching on?! Little would they have known that Chrissy had only been playing for a couple of months, but had learned fast!

Well anyway, sadly, disaster struck as Christina’s opponent had pocket 7s. Things were looking good, but ridiculously, her opponent made a straight on the river! It was just so sick. You will always long to be all-in with aces heads up! Chrissy and I had imagined her name was on the trophy, but it was not to be. She collected yet more cash though, and it was all hers this time, as she didn’t need to pay me back for anything. I was still incredibly proud of her, of how well she’d played, and still, her dignity in defeat.

We didn’t stay around long then. It was about 1.30am, and we were keen to get back to Cardiff again now. We stopped off briefly for a cigarette, a wee, and a drop of home-made wine. I started to consider that she had encountered one of the very few occasions where it might be worth putting down aces pre-flop! It was just that, as they were about level in chips, but Christina was by far the stronger player, she might have been better off continuing to out-play her opponent, and gradually grind down her chip stack, instead of putting herself at potential risk by being all-in. But really, this idea was just ridiculous – of course, you cannot fold aces pre-flop heads-up!!

Well anyway, aces had not been kind to us overall. They had been the very first hand Christina picked up in the main event (and lost with), I had lost with them to put myself out of Friday night’s tournament, and dramatically, and worst of all, she had lost with them in her very last hand of the ladies’ event! The only time I’d won with them was playing in a hand at 5am on a cash table, against Christina herself! 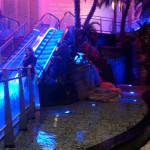 Overall though, we’d had a good time. We were very impressed by the casino itself, all the staff were friendly and helpful, and we met some nice people along the way. Christina even saw the (female) president of the Cardiff University Poker Society in a garage near to the stadium, but she hadn’t entered the ladies’ event in favour of going to see Justin Timberlake in concert! The very idea of missing the ladies’ event in this way was not something Chris could understand. I can definitely say that this weekend was the weekend that she cemented herself as a poker player. As for myself, I’m thinking of retiring and becoming her coach!