Currently on display in Chapter Arts is a beautiful sculpture by Patricia Piccinini. I would recommend a trip to Chapter just to see it. The first thing that strikes you as you walk into the gallery, where it is on display in the entrance, other than the hyper-realist nature of the piece – the little boy in the sculpture requires a double-take to check that it is not a real person sitting in – is the sheer warmth between the two characters. If you look straight away to the right of the piece – which you are likely to do as it is here that the two characters portrayed meet in a sleepy embrace – you may assume it is a grandmother contentedly asleep in the arms of her grandson, and every young boy, or even grown man might feel an affinity with this immediate image.

As you cast your eyes over the entire piece, you quickly realise that the grandmother is not a naked human after all, but some kind of mythical creature, perhaps an elderly mermaid, for it has no feet, but some kind of flipper, with toenails that are almost like shells. Exactly what the creature is does not really matter however, because it’s almost as if the apparent affection between the two characters is the more important aspect. The smile on the creature’s face is so enormous that it’s as if the creature has found a place of near-perfect happiness.

The sculpture deals very effectively with the concepts of belief and reality. As a work of art, neither of the characters are truly real of course, but due to the hyper-realist nature of the piece, we instantly are able to believe that it is a real depiction of a little boy. The mermaid character, while not a real creature, is believable for what it is. Clearly, the artist is trying to show also, as stated, that the little boy believes in the character, and believes he loves her, and therefore that belief is almost more important than love, or in some ways, has to come before it. Maybe it is meant to be a dream sequence, but still the concept of belief is significant, and perhaps whether it is possible to feel love while asleep.

The piece also deals with the concept of beauty. The little boy might be considered as beautiful – he is quite handsome, and also innocent-looking as well. The sea creature also, despite being naked, is completely innocent. Mermaids are of course traditionally depicted as young and beautiful, and here we have almost the opposite – an elderly, and quite ugly creature – but I suppose, with its long white hair, we are able to imagine that in its younger years, before it had started putting on weight, this might well have been an exceptionally beautiful mermaid. The little boy, already with the knowledge of mermaids being beautiful does perhaps imagine this – that the creature in his arms probably was beautiful, in the classic sense, at one time – but equally, he is able to love the mermaid for how she is now. So old does the mermaid look that in fact, she looks almost close to death, and for this reason, the young boy is also offering protection, guarding her against her fate.

But for me, looking beyond the concept of the work, I think the sculpture works overall in the way that it immediately grabs your attention. The phenomenal close attention to detail helps with this, and it is a skill of the hyper-realist artist that always impresses me, the way they are able to depict a mythical being in such stunning detail as to make it believable. Despite being a cold sculpture, the artist has also depicted real warmth and love. It is a piece that will be appreciated by any wide-eyed visiting children, and warm-hearted adults alike. 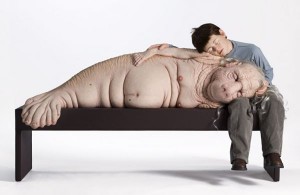