And so I found myself in Bristol. Bristol, the city where I might have gone to University, had I got better A level grades. Bristol, fair play, an attractive city, with plenty of nice architecture, but also many hills, and difficult to get around by car, with a fairly complicated one way system. Bristol, a town of two football clubs, and a poetry scene which puts Cardiff to shame, frankly, despite all of Cardiff’s more recent efforts. 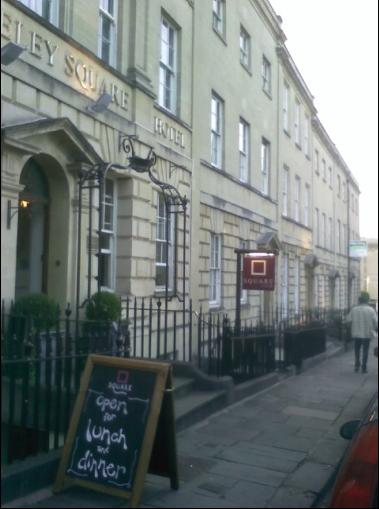 But I was not in Bristol for any of that. John Squire has once again been busy putting together a whole year’s programme of exhibitions. This one was at a place called the Square gallery, which frankly seemed too appropriate an opportunity to miss. You’d think he was becoming a follower of me so apt was the location. Chances of this are quite remote, I grant you. Instead, I keep up my almost pathetically devotional routine of chasing around these exhibition openings. I never actually get invited. In spite of her sympathetic smile, John’s agent is I think probably sick of the sight of me, and so chooses to ignore my calls and emails, and doesn’t send me invites. So I have to track down the owners of these places and blag my way in. Pathetic, I know. I think I might actually give up attending the openings – if I do make it to the exhibitions, I suppose it wouldn’t do any harm to get there for another time during the exhibition’s showing.

One thing I definitely was looking forward to was a free drink. Readers of my review of John’s exhibition in London a while back might recall that here, there was enough free booze to sink a cruise ship on a booze cruise. Sadly, on this occasion, I got there a little late and, to my disbelief, the bubbly by this stage was gone, and I was left to sup on apple juice. 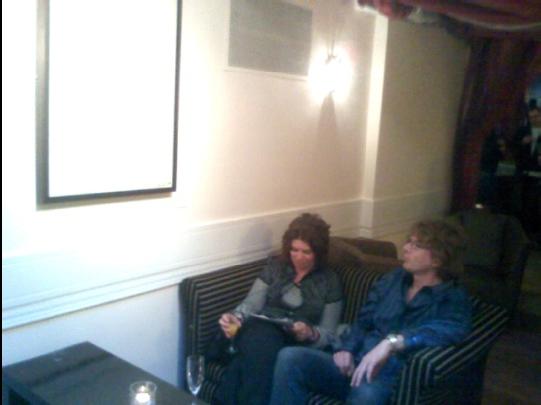 The theme for this exhibition is to some extent in the title, Apertures. Many of the paintings have repeated stencil images. John has used this trick before, but in this case, he is reflecting on the idea of the image being doubled on the retina, as it might be after you’ve been looking at an image for a long time in heavy sunlight. Some of the paintings have quite good painterly qualities. Others are really nothing more than a repeated stencil in a grid formation, but nonetheless, effective. Many of the paintings in this exhibition were in fact square, an observation I later made to John Squire’s agent who must have been astounded at my critical abilities. I did find myself smiling as I walked around this one though, which I haven’t necessarily on previous occasions. Perhaps I am beginning to genuinely enjoy these exhibitions, despite my feeling almost obligated to be there. There is a familiarity I am beginning to understand, there is the formulaic style, and functional titles – “Plain View”, “Swarm”, “Green Composition”, to the sudden exception (itself almost part of the routine), such as in “Suspended by the Feet and Beaten with Hammers”, which obviously forces you to think of Christ, and religious devotion. This is a brash, bright red painting, which I did like, I must admit. In “Latency Period” which has a cartoon bomb as its repeated image, I wondered if there was a reference to John’s period as an artist with the cartoon, Danger Mouse.

The gallery itself was a snazzy bistro type place, with the paintings serving more as a backdrop to, on the first floor, a restaurant and lounge area, and on the lower floor, a quite posh type of bar. Once again, hats off to the positioning of each painting. Each was well lit, so that you could focus on each should you choose to, but at the same time, they easily blended in to the smart surroundings. It did make me thing that for this reason, potential buyers at this exhibition might well have been fellow trendy bar-owners, because they did seem suited to such an environment, although at the same time, they would look good on many a living room.

I’d got round the whole place, before returning to the start, where John plus agent were now waiting – pretty sure they hadn’t been there when I’d come in. I glanced around at the pictures in this room. There was a painting in the corner called Sit, the stencil image on this one being an office chair. Next to it was a pink sofa-type chair. I glanced over at John, and for a moment, wondered if I was being commanded to sit, but I decided after all not to sit down, & instead went outside for a cigarette.

I came back in and had the chance to speak to John. Did not have much to say after all. He asked about the magazine, I gave him a copy of the latest issue. I also handed over a sheet of interview questions, which was quickly grabbed by his agent, so I don’t know if he ever even got to read them, let alone answer them. I asked about the forthcoming exhibition entitled Nefertiti, which I was interested in because Karen has an interest in Nefertiti. I tried to question him about something I’d thought of, ie. like the notion of images being repeated in our line of vision, which is almost a distortion of what we are seeing, unlike in a 3D film, when you see 3D normally, objects close up which you are not focussing on stay blurred, and I wondered if this effect could also be emulated in a painting. John didn’t really seem interested in this however – I’m not even sure if he was even all that interested in the subject of his own paintings, which saddened me a little. I also gave him a copy of the Smiles and Frowns album, one of my favourite albums, and this did seem to arouse some enthusiasm.

This article first appeared in Issue 8 of Square Magazine.