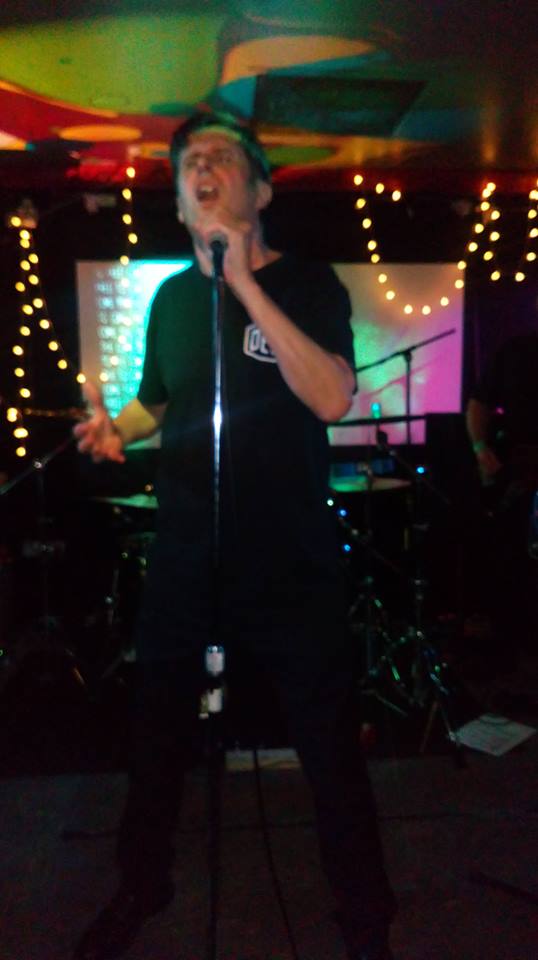 I first saw The Band of Holy Joy when I was seventeen. A little known band called Carter The Unstoppable Sex Machine were in support. Carter of course would go on to much bigger things, whereas The Band of Holy Joy’s career must have stalled which is a shame. Maybe if they’d changed their name to the Band of Holy Sex or something along those lines, things might have been different.

My friend Leon, who forms part of Little Eris, and I arrived a little early so we were there in time to see tonight’s headliners sound check. I walked straight up to lead singer Johny shook his hand and asked if they still played the song “Tactless”. This was a stand-out track for me on an NME/CND video, a prized possession I once owned, which also featured such indie big hitters as Morrissey, The La’s and My Bloody Valentine. Sadly, Johny said they no longer play it.

We left the band to it, and checked out the bar adjacent to the venue. Le Pub has a chilled vibe. Dogs are allowed and they serve vegan food. You’d imagine that if post-Brexit the smoking laws were relaxed, this might be one of the first places to allow smoking indoors again.

We had a game of pool. The yellow and black were missing, with instead two extra reds marked “yellow” and “black”. Also, they only had short cues. Still it was only 50p. Leon claimed that in the Valleys there are still pubs that have pool for 10p a game. I don’t believe him.

Bronwen, the main component of Little Eris finally arrived with her posse and as time was ticking on and she was due on stage, it wasn’t long before she was setting up and making a start. 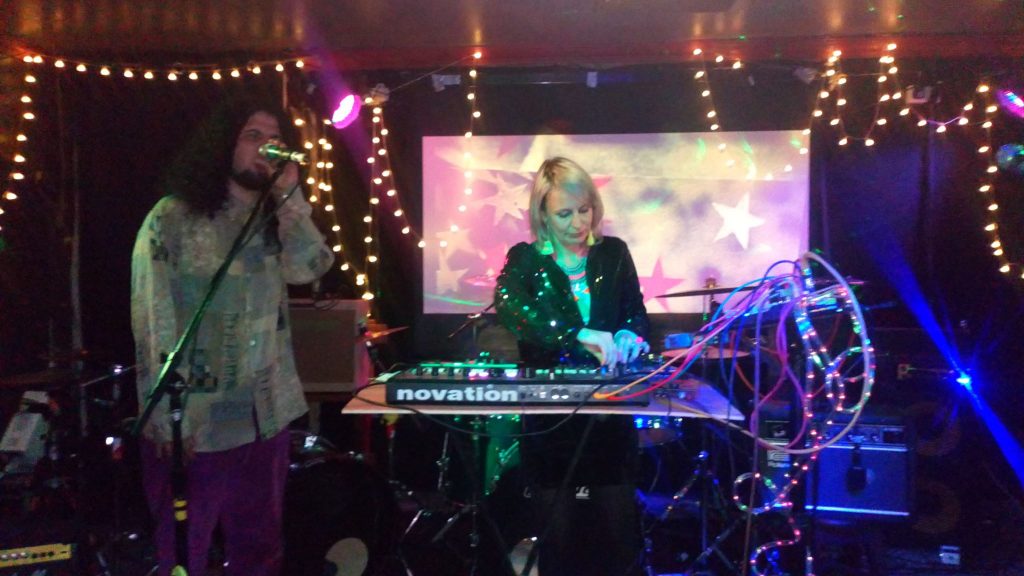 Little Eris are all glam, glitter and fairy lights with the music being a curious mix of experimental and more mainstream sounding dance sounds. You never quite know the direction the music’s going to go. Bronwen has been dubbed the Welsh Bjork but that slightly undermines her contribution on stage. Her vocals are minimal, at times a bit like Donna Summer singing “I Feel Love”, but for the most time, she is twiddling knobs like billy-oh. I have no idea what she’s doing exactly, but she looks fully in control.

In contrast to Bronwen’s raver looks is Leon who joins her on stage for two songs looking very much the hippy with his long, wild black hair, brightly coloured shirt and purple cords. Just as at festivals the two types of people come together to be unified, on stage under the banner of Little Eris, these two compliment each other well. Leon’s vocal is an unexpectedly, slightly angry rap, but he has presence. Generally they went down very well with the slightly surprised looking crowd.

Abstract Man passed me by a little. They joked about how their average age has plummeted to fifty with Rupert on drums. At times they had a little of REM to them. I’ve always been quite a big fan of REM despite the fact that I do sometimes consider them to be a pub rock band that got lucky. I guess Abstract Man just haven’t got lucky.

And so finally, The Band of Holy Joy take the stage. Johny, who has changed from his bright orange jumper to a black biker t-shirt, has always reminded me a little of Shane McGowan and he is similarly charismatic. He invites everyone to come closer to the stage which we duly do. He is quite a theatrical and expressive lead singer. It strikes me that he looks as if he is exorcising demons if that’s not too much a cliché.

Essentially, the Band of Holy Joy are promoting their new album “Funambulist We Love You” at the moment, but their career spans thirteen albums in total, so you can imagine, they have a good number of songs to choose from. Despite this, they also sneak in a cover, the Northern Soul classic “Open the Door To Your Heart”.

Johny is at his most expressive for me when he sings “The Devil Has a Hold On the Land” a very impassioned song which is sung with such commitment that you suddenly feel convinced of the song’s sentiment.

The band’s sound is generally very pleasing on the ear, but perhaps the reason they’ve remained a cult band is that they don’t have enough killer tracks that really pack a punch. I guess they’ve been treading the boards for long enough now to not worry about mainstream success, instead concentrating on plying their own specialist trade.

And this is despite the fact that they have been based for most of their lives in London, the place most bands go to find fame. Perhaps Johny has just refused to sell his soul to the devil. Originally from Newcastle, Johny has kept his Geordie accent and is happy to talk football with me after the gig. He strikes me as the sort of person who has a heart of gold and in some ways, for me, seeing The Band of Holy Joy again after a break of around twenty eight years was a bit like catching up with a good pal or even girlfriend I hadn’t seen in all that time.